Vegan leather and faux fur are huge trends this season. Here the star, talks about why she, for one, will never again wear Barbed Wire-style black leather

Read more from the autumn/winter 2018 edition of The Fashion, our biannual fashion supplement

Idecided to become vegetarian when I was a child. My father was a hunter and one day I found a dead deer, without its head, hanging outside our home, dripping blood into a bucket. I cried for days. It wasn’t hard for me to give up something so cruel. I got my father to stop hunting, too.

I call myself a naughty vegan. I live in France, I eat croissants. I do the best I can, but I’m not a dictator. It’s a radical choice to be vegan, so I’m not so strict. Stella McCartney and Paul and Linda created Meatless Mondays, so even if you don’t eat meat on Mondays, you are still doing something good. If you’re Canadian, like me, and grew up in the coastal areas, sometimes you think if you’re vegetarian, you can still eat fish.

You learn as you go along; you make changes. I once promoted a fur line in Russia, where the market is very real because of the weather. And Barb Wirewas all leather – I just didn’t think of it at the time. Today I wouldn’t wear fur, and I don’t want to glamorise it by wearing faux, but it’s still better than wearing someone’s else’s skin. I sent faux fur coats to Melania Trump and Kim Kardashian, and both have sworn off fur since. On my sons’ modelling contracts now, it says no fur. They’re both vegan, too, but I never forced it on them. 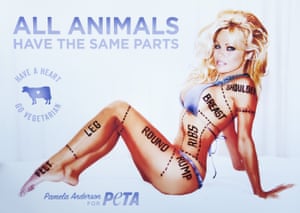 I started with animals and moved to environmental causes with Vivienne Westwood. She and I are kindred spirits, and I’ve learned so much from her. Her message is more in-depth than the hashtag movement; you have to go further than that – we can control what we wear, what we eat. Fashion has so many new fabrics, recycled from the pollution in the ocean. You just have to be engaged with the world.

As for thinking you’ve done something because you’ve worn a slogan T-shirt or used a hashtag? You still have to take action. I’ve written to governments, delivered a petition to stop bullfighting and protested about foie gras in front of the French government.

I never thought I’d be a style icon. Early on in my career I wasn’t really a fan of clothes. I never thought much about the red swimsuit I wore on Baywatch. It was a beach show and I thought everyone was watching it for the message – it was sweet! I don’t think any of us was trying to act sexy. Maybe the producers had that in mind, but we weren’t thinking about it.

How I dress now is how I’ve always wanted to: in feminine, simple clothing, nothing hard-edged. I don’t like black; I love colours and dresses, and being comfortable. There was a time in my life when everyone was doing everything for me – even my husbands were dressing me. I don’t know where I am in my career. I was going to say I’m glad I’m at the end of it, so I don’t have to be in front of the camera for too much longer. But for the first time in my life I don’t have an army of people making decisions for me. I can finally decide for myself.