In the first part of a series, Guardian Australia reveals the outsize influence of a media mogul two Australian prime ministers blame for their demise

In his farewell speech as prime minister last month, Malcolm Turnbullpointed to “an insurgency” in his own party and “outside forces in the media” as the architects of his demise.

If there was any doubt at all who the media forces Turnbull was referring to during those final minutes in the prime mister’s courtyard in Canberra, there is, after the events of the past 24 hours, none now. 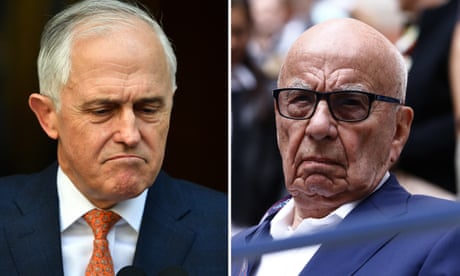 Rupert Murdoch is the name firmly in the frame along with his ubiquitous News Corp empire – an organisation which is accused of playing a major role in orchestrating the removal from office of not just Turnbull but also Labor’s Kevin Rudd.

In the case of Turnbull he believed his Liberal colleagues had been gripped by “a form of madness” so the only way they could see to end the unrelenting internal turmoil and negative coverage in the media was to cave into it and replace him as leader.

Rudd, equally, believes the cacophony of negativity from News Corp undermined his first prime ministership, then that of successor Julia Gillard. He has called for a “full-throated inquiry” into News Corp and branded the company “a cancer on democracy”.

But the details that have emerged over the past 48 hours of the role the US-based Murdoch played during last month’s visit to his Australian assets raise serious questions about how Australian politics can be swayed by a concentrated media industry where News Corp dominates.

Turnbull certainly believes he was the target of a News Corp campaign. When he narrowly fended off Peter Dutton in a party room spill on Tuesday 21 August, Turnbull phoned Murdoch to ask him why he was trying to replace him with the home affairs minister.

Turnbull had watched horrified as shortly after Murdoch’s arrival in Australia, News Corp, the most powerful media organisation in the land, turned on him. The Daily Telegraph warned of “a toxic brawl” over energy policy and that Dutton was preparing to challenge him. On Sky the night-time commentators Peta Credlin and Andrew Bolt ramped up their negative coverage of the national energy guarantee and Turnbull’s performance.

“There was no doubt there was a marked shift in the tone and content of the News Corp publications once Rupert arrived,” one of Turnbull’s former staff told Guardian Australia. “And there was no doubt in our minds that News was backing Dutton.”

The prime minister had another reason to believe the octogenarian media mogul was driving the negative coverage – Turnbull had been warned by another media mogul that Rupert wanted him replaced.

According to both the Australian Financial Review and the ABC, Murdoch had told fellow media billionaire Kerry Stokes, owner of the Seven Network, a few days before that Turnbull should be replaced. Guardian Australia also reported that Turnbull was warned in a phone call from Stokes that Murdoch and his media company News Corp were intent on removing him from power.

Stokes is said to have replied that the likely result of such a campaign would be to deliver government to Labor and Bill Shorten. But Murdoch is reported to have brushed aside such concerns, saying it would only be for three years and he made money under Labor in the past.