For the past 25 years I’ve been lucky enough to enjoy a spectacular view of Collaroy-Narrabeen beach from my old wooden house tucked into the northern slopes of Mt Ramsay.

I survey a gorgeous, curved slice of coast where swell dispatched from the far reaches of the Southern and Pacific oceans reaches a final, spectacular resignation. 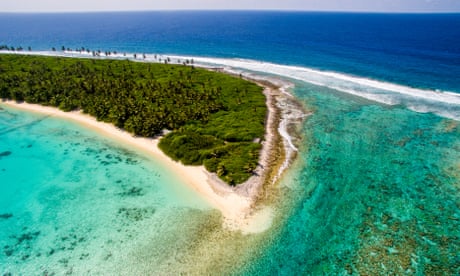 Collaroy-Narrabeen on Sydney’s northern beaches is arguably as well known for its peerless status in Australian surfing culture as it is the pinup for rising sea levels due to climate change.

There cannot be a beach in Australia that has been more studied by experts and fought over by homeowners, beach users and grandstanding politicians than Collaroy-Narrabeen.

At 2.6km it’s Sydney’s second-longest stretch of golden sand and pounding surf (Cronulla, at 4.8km is the longest). It’s also classified as the most at-risk beach from erosion in New South Wales and the third most at-risk in the nation.

Collaroy takes its name from an 1881 shipwreck. The paddle steamer Collaroy, that plied its trade between Newcastle and Sydney as a passenger vessel, grounded at the end of my street, according records in the State Library of NSW.

As for “Narrabeen”, its name is disputed as meaning either “source of fresh water” or “swan”. Camaraigal descendant and historian Dennis Foley, describes the idyllic shores and waterway of Narrabeen Lagoon, “the heart of our world” before British settlement.

Collaroy-Narrabeen is mecca for international surfers. A bucket-list wave.

Quick trivia question: which is the only non-American surf spot mentioned in the Beach Boys’ Surfin’ USA? It’s Narra-beyaaan… There you go. Look it up. (You owe me a chop from your next triumphant meat tray.)

Surf writer Nick Carroll says: “It is possible that more surfers learned to pull vertical off-the-lips here than any other surf spot in the world.” Standards and expectations are high and routinely met.

Master the hassle at “northy” and you’ll survive any competitive break on earth, my surfing husband Brendan Donohoe reckons. He’s been the president of the northern beaches branch of Surfrider Australia since 1999 (also former chair of the board) and through him I’ve had a front-row seat to observe the pitched battles fought over Collaroy-Narrabeen.

For those not immersed in surfing culture, the beach is that one in those ubiquitous news pictures of smashed houses, tangled timber and a swimming pool wrenched from its moorings – all flung to the sand in the wild winter storm of 2016 which swallowed 50m of coastline, 150m of sand and dumped it in the surf zone.

The images don’t surprise anyone with a passing local knowledge. Storms have been claiming houses and various bits of the beach’s four surf life saving clubs regularly since the first recorded image of splintered timber in 1920. Ask the old-timers.

Question is, can a man-made seawall hold back the tides?

One thing is absolutely certain according to coastal scientists worldwide: seawalls protect land property in the short-term but, eventually, destroy beaches.

Think of the dunes of a beach as its precious lungs … breathing in and out with the tides. Sand is accreted, washed away. Breathe in. Breathe out. For the vast swathes of Australia’s uninhabited shoreline it’s a dynamic, natural process.

When humans build houses in the dunes or breakwalls and seawalls on beaches and rivers, they harden the coast and its ability to recover naturally. Such structures have the inevitable effect of reflecting and concentrating wave energy and accelerating erosion.

Eventually, the beach narrows and disappears.

In 2002, the Surfrider Foundation called on the beach-loving residents of Collaroy-Narrabeen to protest the building of a seawall more than a kilometre long proposed by the then Warringah council. Also noted was that seawalls are eye-wateringly expensive to maintain, adding huge imposts to council rates.

Thousands gathered, held hands, drew a “line in the sand”. Said “No to seawalls” and the audacious engineering project was scrapped.

Decades earlier the council had committed to a “buyback” of properties in the wave impact zone. A strategic retreat from the worst of it. A handful of properties were purchased, but the policy was abandoned in 2007, deemed as “unsustainable” into the future, estimated to cost hundreds of millions of dollars by the MP for Pittwater, Rob Stokes.

In 2013 Tony Abbott, member for Warringah, declared that a “green army” would build seawalls up and down the coast. The rising waters would be forever thwarted! Northern beaches mayors said “yeah, nah”. “It’s the opposite of the direction councils are going in.”

The science is in. And it’s not that simple.

The new, amalgamated Northern Beaches council now has a policy of approving partial seawall reinforcements with costs largely borne by the homeowners themselves.

It’s seen as unfair by some. No comfort to the many thousands of homeowners along Australia’s vast, settled coastline whose precious properties (built in good faith) are now subject to the merciless forces of evermore destructive coastal surges due to climate change.

So, what’s the answer?

Coastal municipalities have been tackling the problem with a suite of measures. For some it will be a strategic retreat with assets that can be moved, for others it will be building partial seawalls, cliff reinforcement and revegetation. As is happening in other parts of the world, the costs of defence will sometimes be calculated as too onerous and properties will be abandoned to topple into the sea.

What about pumping more sand to replenish the beach? I hear you ask. Good question!

It’s what Surfrider Australia and others (including Rob Stokes) have been advocating for decades.

After all, it’s been done on the southern Gold Coast since 1976 after breakwalls built in the 60s on the Tweed River disturbed the natural flow of sand, leaving local beaches bare and bereft. Sand is pumped through pipes on to the beaches, to the point where many now complain there’s too much of the stuff.

However, the topography of threatened beaches in NSW is very different to the Goldie. Most of our eroding beaches are locked between headlands and sand is washed directly offshore to deep water, making restoration of our beaches a much more expensive and tricky proposition.

In October 2017, a technical report on sand nourishment was prepared by the University of NSW’s Water Research Laboratory for the state Office of Environment and Heritage.

It notes that in the US the trend since the 1960s has been to move away from fixed structures for coastal protection. These days some 80%-93% of US Army Corps of Engineers’ expenditure is directed to replenishing sand.

The detailed report covers the waterfront in its analysis: the optimum width of beaches that sun-lovers expect; the sourcing of suitable sand with the right grain size; how to get it on to our beaches by either road or via a variety of offshore sand dredges and the attendant environmental impacts.

It’s well worth a read if you’re wondering if sea-level rise is coming to a beach near you. Spoiler alert: it is.

There’s increasing clamour from coastal experts for the NSW government to invest in a dredging vessel (or two) that could ply our coast and continually pump sand on to our most at-risk beaches.

We could name one Beachy McBeachface!

Renting sand-pumping vessels is also an option – there’s plenty of spare global capacity. The cost would be considerable, the oversight demanding and, no doubt, the science and technology is continually evolving. But the utter negligence of government(s) to not act, or even model future solutions, is unfathomable.

The sheer volume of reports commissioned and left mouldering in bottom drawers could in themselves be a handy bulwark in the face of gathering storms.

And those increasingly ferocious maelstroms are coming. Leaving in their wake another round of useless hand-wringing and blame. Hearts and homes broken.

Ask yourself, what is a beach worth? To our economy, tourism and our adored beach-going and surfing culture?

On Collaroy-Narrabeen, at least, the cost of doing something has been estimated.

Too high a price to pay?

The loss of my beloved beach, and yours – and it could happen in our children’s lifetime – is incalculable.

It’s way past time to act.